Mitsubishi ‘takes off’ in North America 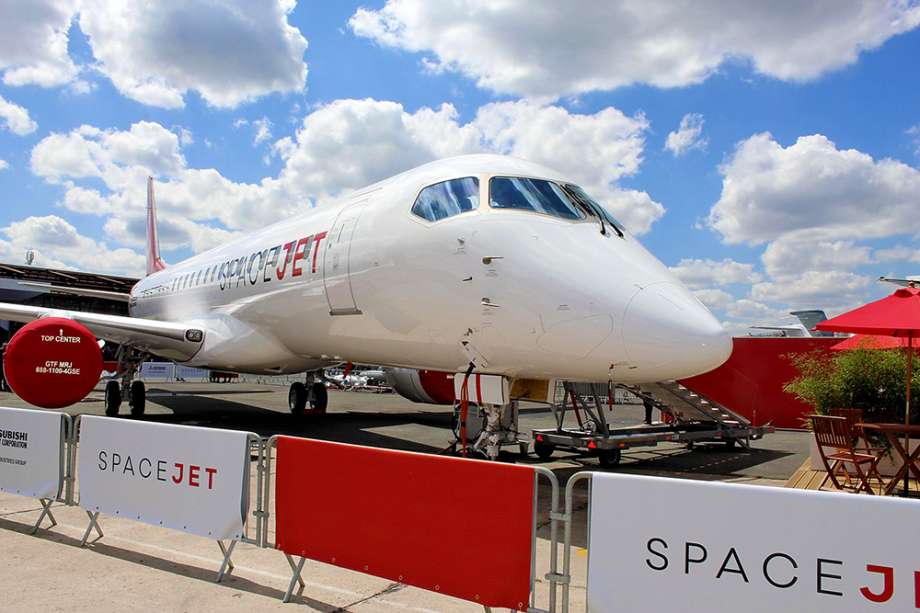 Mitsubishi Aircraft Corp. announced last week that it had signed a memorandum of understanding with Mesa Airlines Inc. of the United States to supply 100 of its Mitsubishi SpaceJet regional aircraft – a major step for expanding its struggling business into North America, the world’s largest market.

Industry observers are keenly watching to see if sales of the Mitsubishi SpaceJet can prvide as momentum for Mitsubishi Aircraft to escape its current strife.

The SpaceJet, Japan’s first domestically produced passenger jet formerly known as Mitsubishi Regional Jet, has a capacity of about 70 seats, and meets growing demand in the United States for smaller aircraft. If the order is formally decided, it will be the first deal for the manufacturer in about three years. With a price tag of about ¥4 billion (about $37 million) per plane, the deal is expected to be worth as much as ¥400 billion (about $3.7 billion).

“This confirms that our aircraft fulfills current and future needs in this industry,” Mitsubishi Aircraft President Hisakazu Mizutani said in announcing the agreement.

According to the memorandum, 50 SpaceJet planes will be dealt with as a firm order, while the Mesa Airlines will hold the purchase option for the remaining 50, giving it the right to cancel the order. Mitsubishi Aircraft plans to start delivery of the 70-seat class plane in 2024.

In the United States, planes flying on regional routes are limited to 76 seats or less. The SpaceJet was developed in two models – 90-seat and 70-seat – but Mitsubishi Aircraft has shifted more emphasis on developing the smaller class to meet demand in the U.S. market.

Jonathan Ornstein, chairman and chief executive officer of Mesa Air Group Inc., which is based in Phoenix, and wholly owns Mesa Airlines, praised the 70-seat type, saying it “can deliver premium experience within the U.S. scope clause” thanks to its large cabin and low fuel costs.

The business opportunity between Mitsubishi Aircraft and Mesa Airlines gained a tailwind from MHI’s announcement in June that it would acquire Bombardier Inc.’s Canadair Regional Jet (CRJ) program.

Mesa Airlines owns about 85 CRJ small aircraft, which will go out of production next year. By offering maintenance services for the CRJ, the Mitsubishi group has created a platform that makes it easier to introduce the SpaceJet as a successor.

In North America, there are about 2,000 regional jets with fewer than 100 seats in operation, half of which are CRJs. The Mitsubishi group will use the deal with Mesa as a springboard to boost its efforts to fill the demand for replacements.

The immediate focus of attention will be put on screening by aviation authorities in Japan and the United States to acquire type certificates for the SpaceJet, a requirement for before commercially flying. Not much time is left before deliveries start in mid-2020.

Another challenge is strengthening the mass production system. At the current pace, it takes several months to produce one aircraft. This means the company cannot accept large-scale orders unless it speeds up the process as soon as possible.

MHI will set up a section in October to promote mass production, with the aim of speeding up response time with automated lines and other measures.